The Journal recently published an analysis of shale wells, suggesting among other things that production is declining due to wells “being drilled too close to one another” and “sweet spots running out sooner than anticipated.” On top of that, the effects of technological improvements were asymptotically declining as we approach the “‘peak of the general physics of these wells’” (quoting James West, a managing director at Investment bank Evercore ISI).

On first glance, this argument is compelling. Below is Hess’s production per lateral foot, grouped by first production date (all data derived from either Enverus/DrillingInfo or the North Dakota Oil and Gas Division):

To look at this chart, it seems as if peak production per foot is mostly flat (and has been flat for many years) at around 2 to 2.5 bbl/oil per foot. Likewise, gains for the first 6 and first 12 months of production are flattening as well.

However, the trend seems to be less pronounced when you control for geology. For example, look only that the wells in Hess’s best acreage (95th percentile in terms of productive geology): 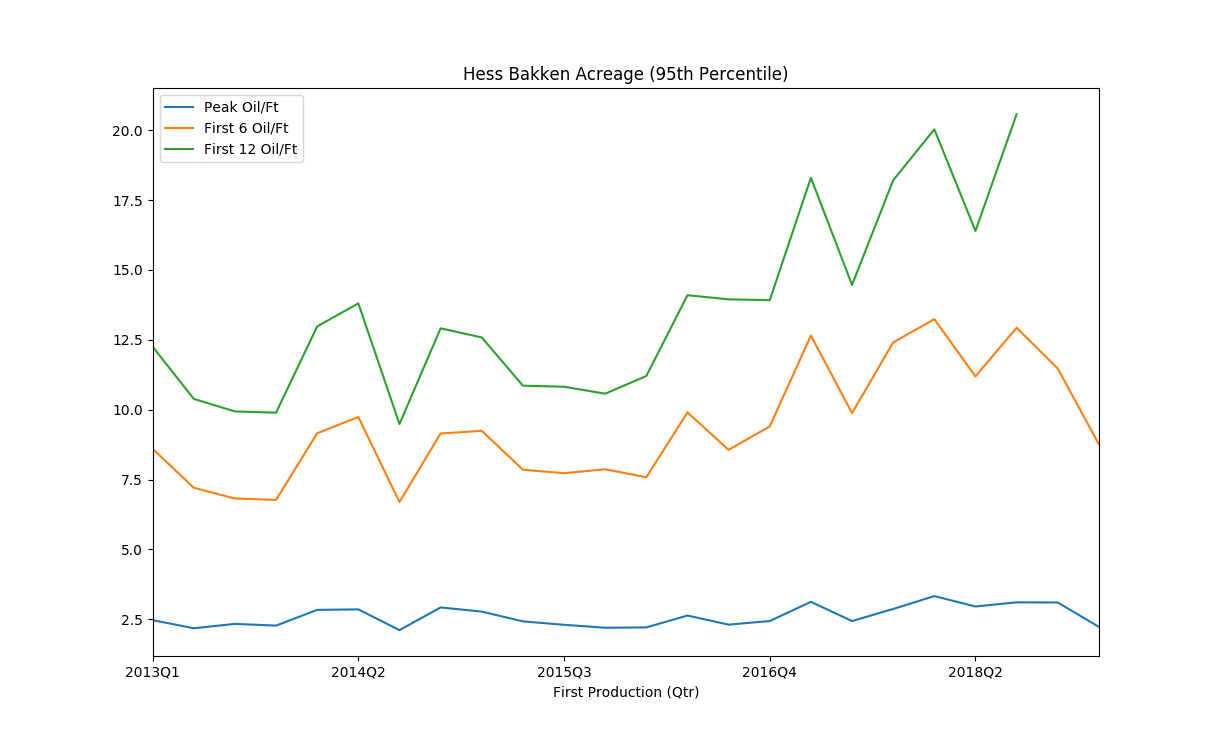 It seems as if the first 12 oil per foot is actually still going up… suggesting that Hess is getting better at optimizing the longer tail of their wells’ production.

Even more telling, we compared wells drilled within the same spacing unit. Wells drilled since 2018 significantly outperformed wells drilled in 2016 and 2017. The newer wells peaked 83.6% higher than the older wells, and produced 279% more in the first six months. Those are astronomical improvements.

What this suggests to us is that, yes, overall improvements in production per lateral foot might be slowing, but not because the well technology has stopped improving. Rather, it seems to use that the slowing rate of production increases is a function of geology. As operators explore new or less-proven acreage, their overall well-quality will decline on absolute basis, even as the wells themselves improve on a relative basis.

Given that Hess has, in our estimation, at least 500 locations remaining in top-tier acreage (and some multiple of that in middle-tier acreage), it doesn’t seem as if Hess is running out of prime inventory. Rather, it seems as if they’ve been deliberately drilling wells in the more northern, middle-tier acreage, either as part of an exploration strategy or as a result of infrastructure constraints.